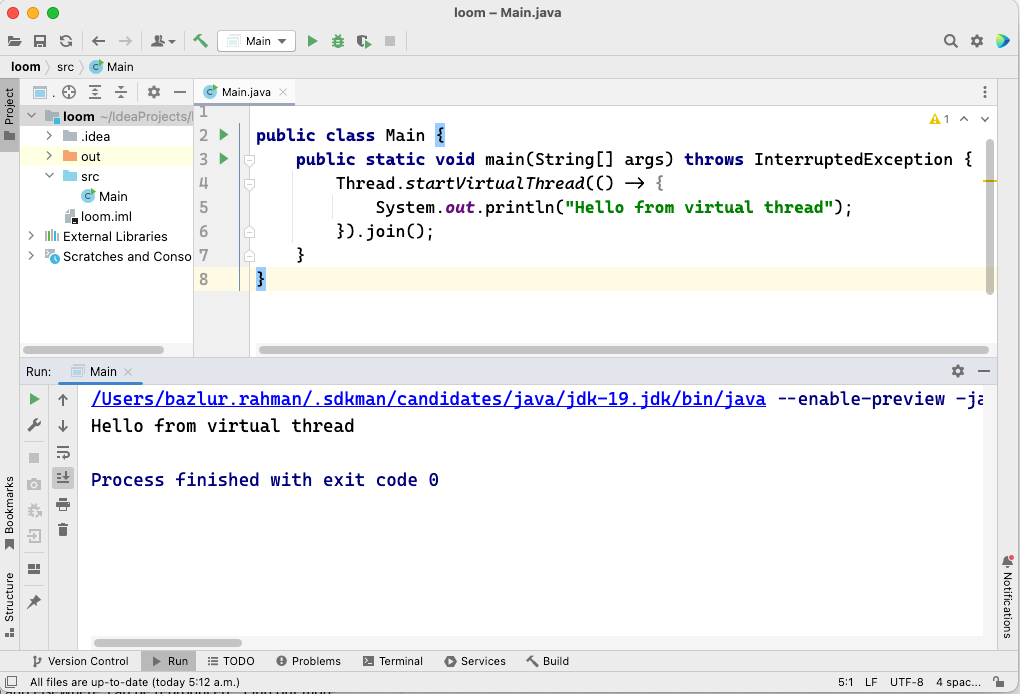 How to enable preview feature and run code from IntelliJ IDEA

JEP 425: Virtual Threads (Preview) has been proposed recently. It has been a long-awaited feature in java.  I wanted to give it a try. So I download the early release of JDK which has the project loom in it. However, it is under preview.

The following snippet was pretty much my first program written for testing virtual threads.

It is so simple that I could just run it in the command line :

However, it needed a bit of yak shaving. I needed to download the JDK, extract the tarball, set the java home, etc. I manage multiple JDKs using SDKMAN; it doesn’t have it since it’s still in early access release. So I had to let SDKMAN know it manually.

Then I figured, maybe, perhaps an IDE could help me here. So I opened my favourite IDE, which happens to be IntelliJ IDEA. I created a project and set up the JDK using the following window-

Then when I tried to run, it didn’t allow me to run the code since the virtual thread was still in preview. Here are the steps I had to go through in IntelliJ IDEA.

First, you need to go preference, and then Build, Execution, Deployment and then Select Java Compiler.

At the bottom, there is a box named the additional command line parameter. Add the following line there-

And then go to the run configuration. Select the modify options and Mark the Add VM options.

You need to add --enable-preview there as well.

Now you can run the project loom from IntelliJ IDEA.