Data types mainly represent the different sizes and values that can be stored in the variable.

In Java Data types are divided into two groups:

Here is a visual representation- 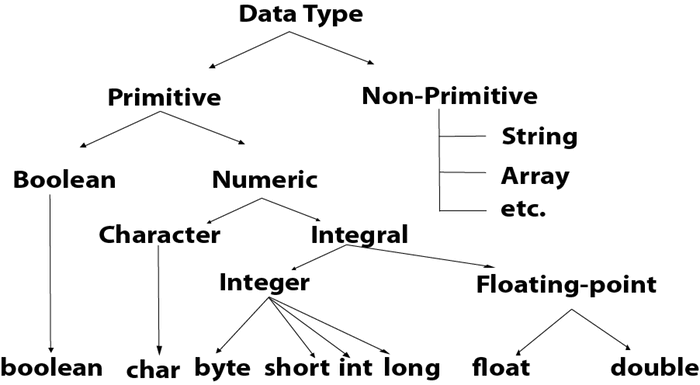 N:B: Bit is the smallest segment in computer memory

The byte data type saves memory in large arrays where the memory savings are most required. It saves space because a byte is 4 times smaller than an integer. It can also be used in place of the “int” data type.
Example:

The int data type is generally used as a default data type for integral values unless if there is no problem with memory.
Example:

The long data type is used when you need a range of values more than those provided by int.
Example:

The float data type should never be used for precise values, such as currency. Its default value is 0.0F.
Example:

Non-primitive data types are called reference types because they refer to objects.

The main difference between primitive and non-primitive data types are:

How the java code gets executed and performs better?

Please bear with my attempt to inform you a little regarding the execution of Java code. Java’s code is compiled into byte code, which Java’s virtual machine executes. This output is an intermedia...

The Java User Group Bangladesh (JUGBD) is now formed and successfully finished its 2nd meetup last week. We are doing great; it’s not an exaggeration. For those who don’t know what JUG is, let me ...

I’ve been working on spring webflux for a while. And in my experience, uploading and reading files in this framework is quite a hassle. Today I am going to tell about uploading a file using spring...